Nixon’s Ghost: The Return Of The Imperial Presidency 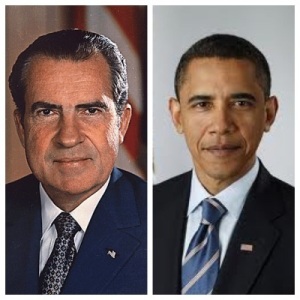 “The Human still has stone age feelings, medieval institutions and god-like technology. That’s what we have to deal with.” – Edward O. Wilson

The famed biologist wasn’t talking about drones when he made that statement, but given the emotional motivations for drone use and the kinds of institutions employing them, his statement certainly seems to apply.

ProPublica has another piece out on the so-called “signature strikes” by U.S. drones in Southwest Asia:

Earlier this week, we wrote about a significant but often overlooked aspect of the drone wars in Pakistan and Yemen: so-called signature strikes, in which the U.S. kills people whose identities aren’t confirmed. While President Obama and administration officials have framed the drone program as targeting particular members of Al Qaeda, attacks against unknown militants reportedly may account for the majority of strikes.

The government apparently calls such attacks signature strikes because the targets are identified based on intelligence “signatures” that suggest involvement in terror plots or militant activity.

As I’ve observed previously, the “signature strike” is to the “Drone Wars” what the “free-fire zone” was in the Vietnam War during the Nixon presidency: an indiscriminate way to attack an insurgent enemy hiding among a cooperative (or cowed) population. Under such a system, the slaughter of innocents is inevitable.
But there are many more similarities between the two presidents’ wartime policies–and the echoes from that earlier era of the Imperial Presidency in Obama’s own approach are hard for any objective observer to miss:

Bogus use of intel/questionable intel (Gulf of Tonkin incident, NIE 14.3 & playing down numbers you don’t like then; downplaying drone strike KIA/collateral deaths now).

Shutting Out Congress & the public.

And the American public seems just fine with this state of affairs.
A poll featured by POLITICO on 2/12/13 showed that 71% of Americans supported the Obama administration’s assassination-by-drone policy. The public is a little squeamish about assassinating Americans–but not by much:

But Americans aren’t as certain about targeting U.S. citizens abroad who have become terrorists. A plurality, 49 percent support the program, and 38 percent oppose killing American terrorists. Fifty-eight percent of GOPers back the idea, along with 48 percent of Democrats and 45 percent of independents.

The highest level of opposition to the drone program comes from independents, not Democrats. A quarter of independents oppose the drone war, and 43 percent oppose targeting American citizens.

The Obama administration is continuing the “secret law” model developed by Addington, Yoo and Bybee in the Bush administration: to wit, the law is used as a justification/cover for policy, not something that represents a boundary within which the executive branch must operate. And if they think Congress will oppose the policy–even ineffectually–they will endeavor to keep it secret.

And its not just classified legal opinions on drones that are at issue here, but the endlessly expansive interpretation of 2001 AUMF. LIbya, and now Mali, are examples of direct executive action to commit US forces to combat without any Congressional authorization/justification.

GWOT, PATRIOT Act, FISA Amdts Act, FY12 NDAA indefinite detention provisions, unilateral war making by POTUS–all are symptoms of the same disease…the Imperial Presidency. That mentality can only be combatted effectively, if at all, in the political arena vice the courts–which have over the decades become increasingly deferential to the executive on national security matters (Feres, state secrets privilege, etc.). What that requires is 1) an aroused population ready to challenge those policies and 2) groups and political figures willing to lead the opposition. Instead, we have a public largely content with remote-controlled wars and public officials passively accepting the situation–when they aren’t issuing press releases hailing the alleged death of “suspected” Islamic insurgents.

Welcome to the new American Imperium.

This entry was posted in Drones. Bookmark the permalink.